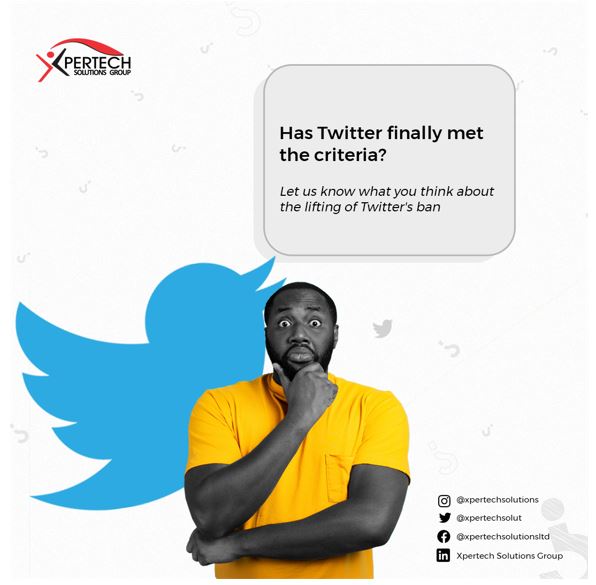 The Nigerian government has lifted the suspension of Twitter operations more than six months after it first declared a crackdown on the social media giant in the country.

Kashifu Inuwa Abdullahi, the director-general of Nigeria’s tech agency, National Information Technology Development Agency (NITDA), made this announcement via a statement today. He was put in charge, as chairman, of the committee (Technical Committee Nigeria-Twitter Engagement) set up by the Nigerian government to oversee talks between the West African nation and Twitter after the ban.

The chairman said the approval was given following a memo written by the country’s minister of communications and digital economy to the President, Muhammadu Buhari. The statement also revealed that the ban would be lifted immediately by midnight WAT, January 13, 2022.

“The Federal Government of Nigeria (FGN) directs me to inform the public that President Muhammadu Buhari, GCFR, has approved the lifting of the suspension of Twitter operation in Nigeria effective from 12 am tonight, 13th January 2022,” the statement read.

“The approval was given following a memo written to the President by the Honourable Minister of Communications and Digital Economy, Prof Isa Ali Ibrahim. In the Memo, the minister updated and requested the President’s approval for the lifting based on the Technical Committee Nigeria-Twitter Engagement’s recommendation.”

Abdullahi also noted in the statement that Twitter has agreed to set “a legal entity in Nigeria during the first quarter of 2022.” The establishment of Twitter’s legal entity, according to the statement, is the social media giant’s “first step in demonstrating its long-term commitment to Nigeria.”

It was one of the three requests, out of ten, Nigeria said Twitter, which established its first Africa presence in China last April, had failed to meet to reinstate the company’s operation in the country months after the ban. The announcement was made by Nigeria’s information minister Lai Mohammed last August.

In addition to setting up a local office or a legal entity in the country, the other unanswered requests were paying taxes locally and cooperating with the Nigerian government to regulate content and harmful tweets.

The portals will serve as a medium for Twitter staff and Nigeria to manage prohibited content that violates Twitter community rules and Nigeria’s law enforcement agencies to present a report if Twitter goes against Nigerian laws.

“Twitter has agreed to act with a respectful acknowledgment of Nigerian laws and the national culture and history on which such legislation has been built and work with the FGN and the broader industry to develop Code of Conduct in line with global best practices, applicable in almost all developed countries,” Abdullahi made this known via a section of the statement.

In June, Nigeria suspended Twitter after the company deleted a controversial post made by the Nigerian president threatening to punish regional secessionists. Mohammed, who made the announcement, cited the persistent use of the platform for “activities that are capable of undermining Nigeria’s corporate existence” as the main reason behind the retaliation.

Over the next few months, calls were made by several individuals and corporate bodies to reinstate the platform’s operations while others, like former U.S. President Donald Trump, praised the move.

In October, President Buhari, during his televised presidential speech on Nigeria’s 61st Independence Day anniversary, said the ban would only be lifted if the social media giant met certain conditions. And in a corresponding emailed statement to TechCrunch, Twitter, via a spokesperson, said discussions with the Nigerian government had been respectful and productive” as it looked forward to “seeing the service restored very soon.”

Three months on, it appears both parties have reached an agreement. TechCrunch reached out to Twitter for comment and to confirm if the company met said conditions. However, we have not received any press time.

3 things to know about digital marketing

Digital marketing is the component of marketing that utilizes internet and online based digital technologies such as desktop computers, mobile phones and other digital media and platforms to promote products and services. It is very cost-effective to use online marketing methods. In this post, we’ll cover three reasons digital marketing is important to your business.

1. You reach people at the comfort of their homes

Your customers are online, which highlights the importance of digital marketing.

With the growth of the Internet, more people are spending their time online. Over 7.7 billion people use the Internet across the globe.

To drive the best results for your business, you need to build your online presence. You will reach more leads that want your products or services.

The ability to target your audience is one of the most obvious reasons why digital marketing is important. You have some control over placement and size.

But what percent of this billion is actually your target? A particular fashion magazine might have a demographic 59% female ages 35-55. They may have some college education. And you know they’re interested in the type of fashion depicted in the magazine. But that’s a huge demographic.

One of the gifts that digital marketing has given us is the ability to dissect huge demographics. Whittle them down into very targeted groups to get super-focused on a specific kind of person.

3. Easy to Scale and Adapt

As with any marketing, there’s initial investment required to get traffic flowing. But the importance of digital marketing to small businesses becomes very clear when you see how easy it is to scale and adapt as your business grows.

For example, with social media campaigns, display ads and search ads you can choose a daily budget. You know exactly how much that campaign will cost you.

Now you begin to see amazing results. You don’t have to go in and renegotiate an ad spot to keep the ad running. Your ad continues uninterrupted. As you continue to convert that traffic, you just increase your daily spend and revenues with it.

If you got a massive order in from a customer and need to scale back to avoid getting backlogged, it’s just as easy to do that.

You’ve got the power. Just make that small change and re-launch the ad.

The importance of digital marketing lies in the fact that you can get instant results. Analyze data and make changes fast to reduce wasted ad spend and lost revenues.

This leads us to just how cost-effective digital marketing is for a small business.

To find out more about digital marketing, follow us on our social media pages or visit our website

March 11, 2021 xpertechsolutions Bussiness, Future, General, IT, Science No comments yet